There are days that you look back on and think to yourself… What just happened? Why did that go so wrong? This past Sunday was one of those days. It wasn’t all bad though for the team. We did end up with five riders that finished their races out of seven. Three of our riders though have seen better days including me. Galen Stilgebauer was there to capture some of the images on his camera. 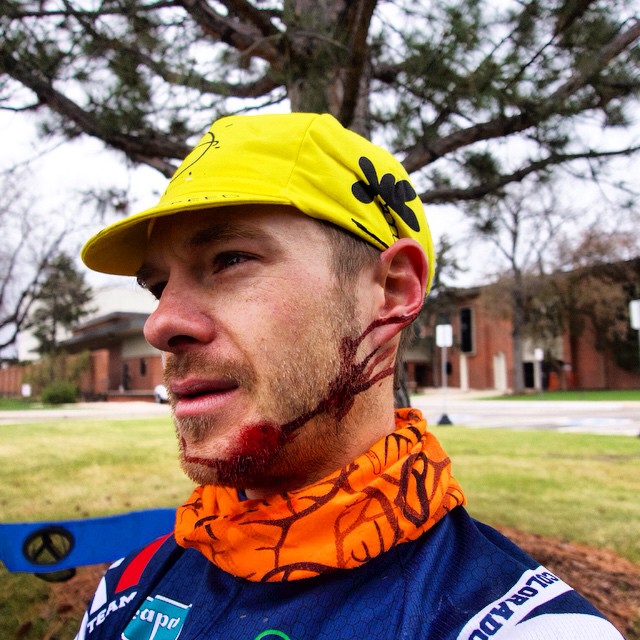 Galen captured a shot of Ben in Shock after the race.

The term Carnage comes to mind. The definition of carnage is, “Large-scale killing or maiming, as in war or an accident.” (thefreedictionary.com) That is pretty much what occurred (at least the maiming part).  Ben and I were having a real good race. We had moved up to the front on the first lap and even led the pack for part of it maintaining good position. People were a little nervous because it was cold out and there was some water on the course, but overall things were looking up. Ben was staying protected just behind me and we were completing our second lap. The final turn is a long sweeping right. We were going 30 mph into it. There was nothing to it. Just sweep right and get ready for the long drag to the finish line. complete the circuit two more times and the race is over. But things didn’t quite go like that. Ben and I were about 10 to 15 riders back on the outside of the field staying out of trouble. I noticed out of the corner of my eye a guy getting a little squirrely up ahead on the inside. He rode into the guy next to him and they both went down. I had a bad wreck last year at the Air Force crit and I always remind myself to look for the way out. My mind flashed and I thought we can get around them on the outside. That was about the point where people started skidding across the road. I ran out of real estate and before I knew it I had tagged the curb with my front wheel and supermanned into the field. Ben slammed on his brakes and went over his handlebars landing face first on the pavement with his arms out in front. Bam… The rest is a blur but I remember getting up checking myself out and then running over to see if Ben was alright. Ben took the worst of the fall and I waited with him til the paramedics showed up. He had blood pouring out of his chin and he claimed his wrist was hurting him. Later we found out that both of his writs were broken. I checked on my bike and found a mangled mess. 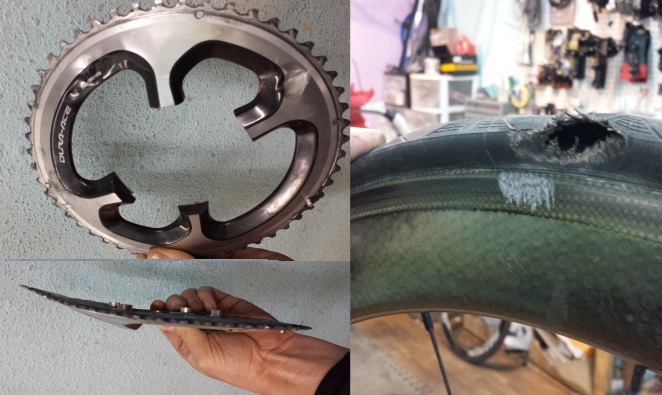 The chain ring and crank was completely destroyed, the front tire had a one inch hole in it, and the wheel was jammed against the fork. We will see what the final assessment is when our team sponsor Velosoul checks it out.  Garrick Mitchell caught the crash that took Ben and Myself out on his onboard camera.

Ben ended up breaking both his left & right wrist and spent most of the day in the ER. It was not fun. We all know that riding our bikes can be dangerous. It is just a shame when people go down. Be sure to always wear your helmet kids. It was a scary wreck and I hope everybody is alright. Heal up quick Ben. We will get you back on that thing soon!

A special shout out to our team sponsor Velosoul for looking out for us. They are working on our bikes so we can get back out there on the road.

The SM5 race was equally as sketchy as the 4s. There were a number of smaller wrecks in that race, and our teammate Dan was caught up in one of them. He went down hard and took a hit to the face. He was pouring blood from the his upper lip, but he remounted his bike and fought back into the race to finish 21st. That never-give-up attitude is amazing. Andrew Smith had our best finish in this race coming in at 11th. Our CAT 5 guys are learning their way around the race course. It will be exciting to see what they can produce this year. 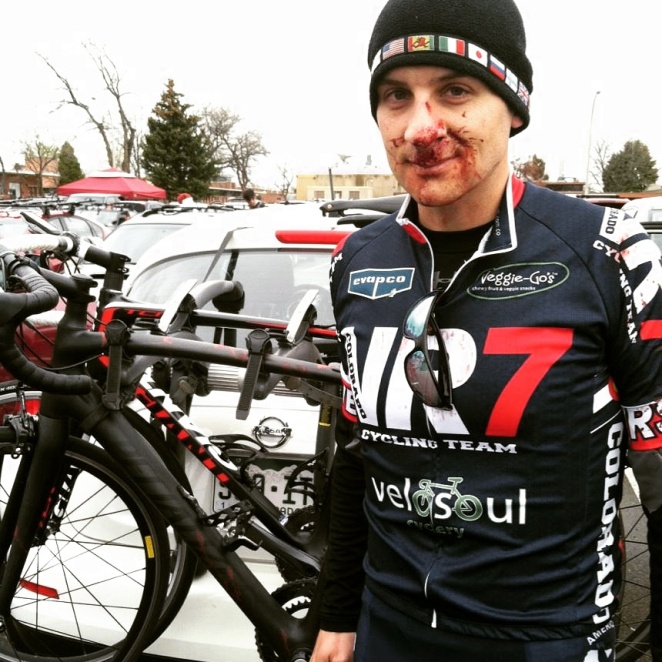 Thank goodness things settled down later in the day for David. David had a strong race in a strong field. He ended up keeping the rubber side down for the whole race and crossed the line 15th. Again Garrick Mithcell caught the action with his onboard camera. That guy is a beast. He races both races most weekends. This video gives you a better feel for the course.

Some of us might be a little banged up right now, but we will be back out there in no time to mix it up again. Heal up quickly and never give up.