The University of Denver hosted the first crit of the season here in Colorado. The race is held in City Park right in the heart of Denver. Beautiful weather awaited a sold out field for the SM4/5 race. The field consisted of about 75 CAT 4/5 riders who have spent the winter cooped up on the indoor trainers and doing more skiing than riding.

The course runs counter clockwise in a triangular shape with a number of technical roundabout turns.  It is a short lap at .75 miles and the course races surprisingly fast.  You ride south from the start, straight into a 90° left which takes you into the first round-about section.  You ride on the inside of the round-about and then smash straight into a 90° left hander.  There is a short recovery section into the next round-about which you ride on the outside.  You can hold a ton of speed through this turn, we were hitting it at 26-27 mph, no brakes here.  The next straight is downhill and allows for some recovery if you have a wheel.  The last bend into the finish is deceiving.  It looks like a simple left hander, but there is a manhole cover right in the middle of the road exiting the turn, and some weird holes in the street as you enter the turn.  It takes a few laps to find the right line here.  Coming out of the turn you hit a false flat into the finish. This is the place to move up if you have the legs. Do this 20 times and the race is over. 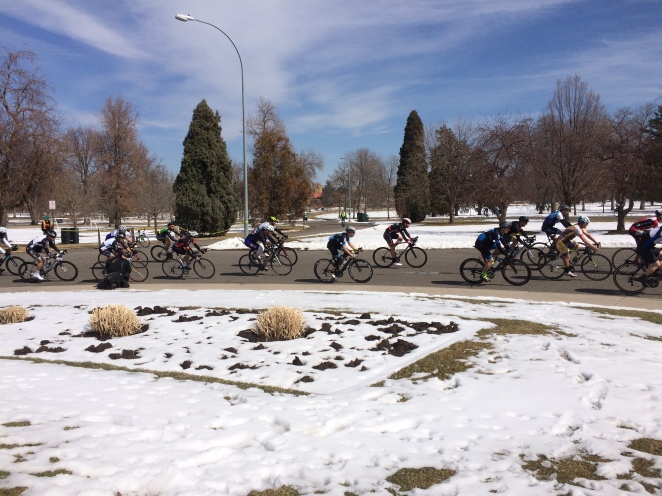 VR7CO had a mini squadron of 5 freshly shaven cyclists ready to ride for the SM4/5 race.  The event sold out, so there was a full field of about 75 guys lined up.  The race director asked who had never raced before. A few shaky hands shot up. He ran through his speal for the race asking all of us to be safe and have fun. He then cleared out and let it rip. From the gun the pace was super high.  We did the first 3 laps at a 27 MPH average… which is blazing fast for a 4/5 field (the pro/1/2’s were in the 28-30 range.)  The bright side of this was the field was strung out almost immediately, the not so bright side was that I wanted to die.  My stomach felt like I had taken down a 12″ philly cheese steak before the race when in reality I had not been able to eat for like the past 6 hours.  So yeah, there I am, hanging on for dear life with a metaphorical philly cheese 1 footer hanging out in my tummy.  Awesome.  The first couple of turns were what is expected from the first race of the season. Hard on the brakes into the turn and an all out sprint to close the gaps out. The outside lines were the most efficient on the first two left handers and the inside line was the most efficient on the large roundabout and the last turn before the finish. After about 5 laps the field shredded and there are various plugs of 4-5 guys just kind of cruising around. The fitness level of the field is extremely varied. The guys on the front seem to have come from the southern hemisphere and spent all summer down there training for the first race in Colorado. Or at least that is what I convinced myself after seeing them eventually motor into the distance. 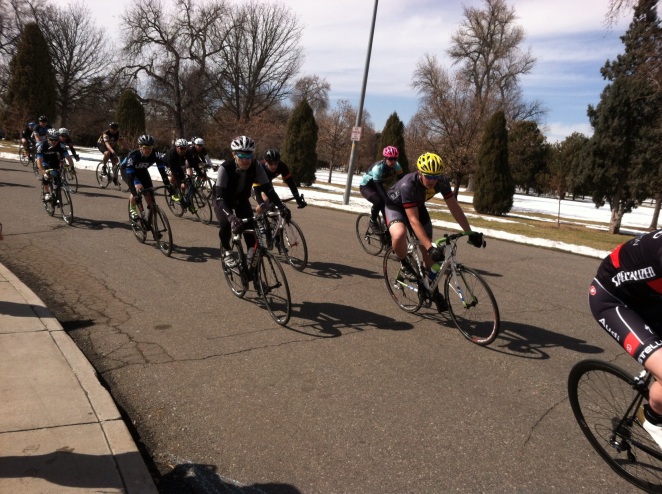 Once everyone was in cruise mode, and my HR had dropped about 10 BPM things got a tad more enjoyable.  I spent the rest of the race refusing to do any work and wheel sucking like an absolute champion.  For one unfortunate minute I ended up pulling, though it became clear that it was benefiting no one, so I sauntered back and re-commenced my drafting. My other team-mate Devin ended up all by himself a little further back, and Andrew and Chris were in groups right behind Devin. Andrew’s group finally caught up to Devin who refused to give in until the moto finally caught both of them and whistled them to the side.

My race continued for a good 30 minutes or so and just when I thought…”oh hey, 5 laps to go, I can actually hang on for that long” the moto appears, and his tiny little french sounding horn starts beeping at me over and over. Damn you moto. Damn you and that miniature horn of yours.

I then veered onto the side walk, feeling proud of my sweet drafting skills.   Thanks for the memories DU. Another solid race in the books.

Watch this video, the guys on the right side in the VR7 kits are Devin and I.  Do not let our casual body language fool you, we are working depressingly hard. Thanks Team Cyked for recording this.